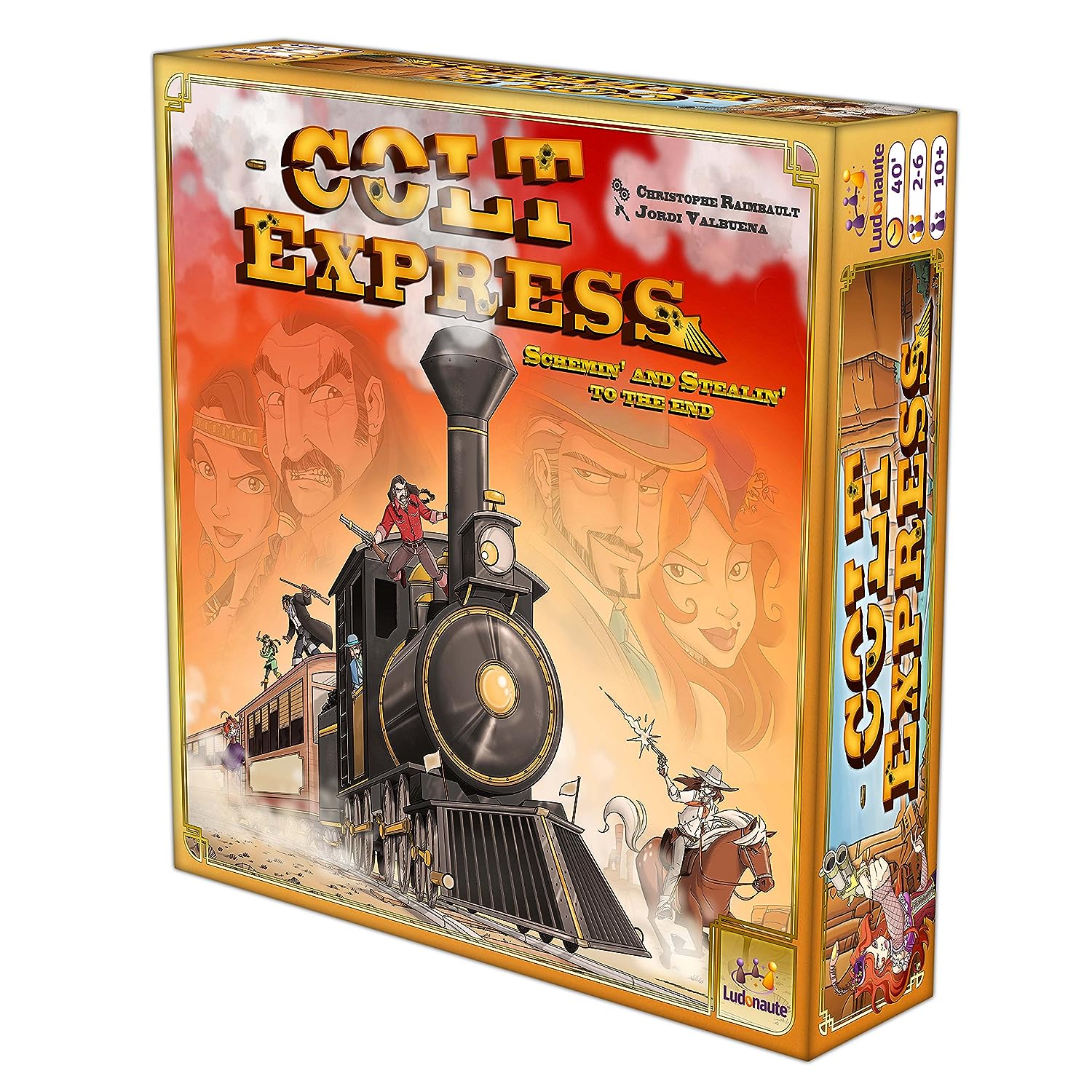 Ah, the Wild West. A time when guys and gals rode horses, chewed tobacco, and shot each other at the slightest provocation. Cowboys and bandits fought on the lawless plains, riddling the desert air with bullets and hilariously outdated insults. Clattering steam trains roamed the desert, taking high-falutin' rich folk - and their valuables - from town to town. Except it really wasn't like that at all. It was mostly cholera, dust storms, and drinking yourself to death in a run-down frontier bar. But that's not very romantic, so let's suspend our disbelief for a minute and talk about Colt Express. Colt Express is a game about clueless cowboys and backstabbing bandits. This is the Old West of the Shanghai Noon variety - silly, cartoon-ish, and stupidly fun. You play a group of bandits that have set upon the Union Pacific Express train with the intention of relieving the passengers of their hard-earned riches; however, your egos aren't going to take a backseat for this one. Your goal is to be the richest bandit at the end of the game, and if that means shooting your friends, well then you're just gonna have to shoot 'em, ain't ya?

Choosing from a colorful cadre of banditos with names like Cheyenne, Tuco, Shadow, and Doc - each with their own special power - you play the game in two stages. Stage 1 is the Schemin' phase. This is where you and your group take turns placing action cards on a common pile - actions ranging from moving horizontally or vertically, to shooting or punching - to prepare for the next stage: Stealin'! In the Stealin' phase, your actions are carried out in the order they were laid down. This is called an "action programming" game and it has never worked quite as beautifully as it does in Colt Express. Many a "plan of action" in my games have been completely derailed by another player's moves, usually to hilarious results. You thought you were gonna move cars, punch Tuco, and take his gems? Too bad, Django played a shoot card right after your movement card and his shot pushed you into the next car. Now you're in a car with Doc and he's itching to punch someone. Have fun.

Chaos is king in Colt Express, and the more players you have, the more chaos will reign. While it remains fun with fewer players, Colt Express shines with 5-6 players. The constant push-and-pull of the gameplay gets turned up to 11 and the Stealin' phase starts to feel like a slapstick comedy. Overall, no matter how many people you play with, I would give Colt Express my highest recommendation. It's fun, accessible, and well-priced for the content. Gamers and non-gamers alike will love it. It even comes with an incredible 3D train/game-board and entirely superfluous but awesome props. Colt Express is a win-win. Now, that Union Pacific train is out there - go get it, pardner.

- Charlie, The Toughest Outlaw This Side of The Computer Screen