The year is 1920. High up on the freezing slopes of the Himalayas, Mark Harrigan, soldier-turned-savior, faces off against a formless tentacled horror from another dimension. He feels a little less sane just looking at it, but he keeps his composure for the fight ahead. Armed with his trusty .45 pistol, he takes aim and fires. The dice are rolled – no successes. Uh-oh. The amorphous beast devours him whole. So it goes in the dark world of Eldritch Horror.

Eldritch Horror is a cooperative board game for 1-8 players. Deeply rooted in H.P. Lovecraft’s Cthulhu Mythos, which emphasized the terrifying insignificance of humanity in the universe, your ragtag group of investigators must travel the globe, solving mysteries and fighting unimaginable horrors, while attempting to stop the awakening of a Great Old One, an ancient god-like monster who could destroy the world. 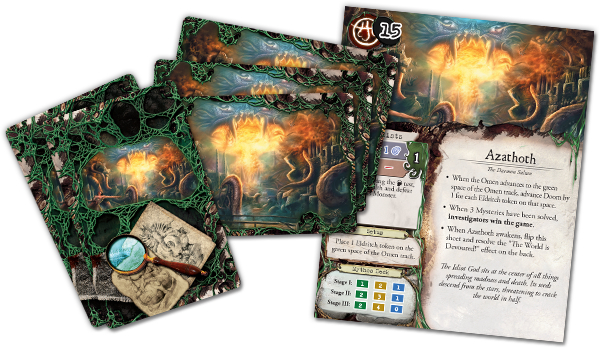 Players control a group of unique investigators - including a politician, a shaman, a sailor, and more. Using their unique skills and any items that they find or buy along the way, they must travel from country to country closing gates, which are otherworldly portals that spawn each turn and regularly spit out new monsters. Each location has an associated encounter card, which gives you a mini-story about your investigator's adventure in that area. Often, they require a skill test, with a real chance of failure, but a great reward if you succeed. When it comes to player action, the game is as tactical as it is atmospheric. If you've ever played the excellent "oh god we're all gonna die" simulator Pandemic, you know the puzzle - can I make it to Rome to grab the Necronomicon from Silas Marsh and get to London in enough turns to stop some terrible event? Or should I skip Rome and head straight to London, giving up the potential bonuses that the forbidden tome provides but ensuring I close that gate in time? This kind of strategic depth makes the game more than just a choose-your-own-adventure novel. Every action feels hugely important, especially in the face of the game's "doom track" - the counter that marks your progress towards... you guessed it, doom. 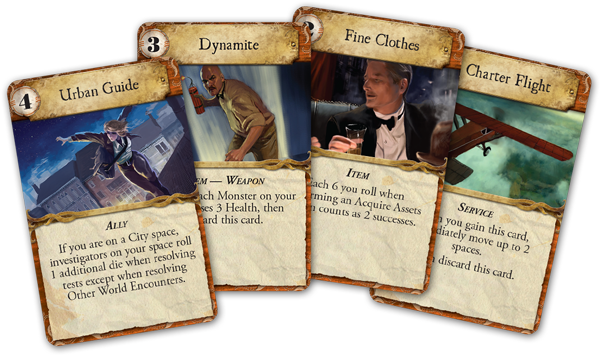 I’ll be upfront about it: Eldritch Horror is a brutal, unforgiving game. Sometimes the dice turn against you and you fail. You will lose a few games. Your investigators will die horrible, unspeakable deaths. Past actions will come back to haunt you. Remember that debt you took on so you could buy the double-barreled shotgun? Well, unfortunately for you, it's way past collection time - they are out for blood. That shadowy man in the alley who offered you forbidden knowledge in exchange for a unknown favor? Well... I'll let you experience that for yourself.

That being said, Eldritch Horror is a blast. For all the difficulty, winning actually feels like an accomplishment. The 2-4 hour length seems daunting, but the game is so engrossing that you will hardly notice the time pass. With nearly 300 unique items, spells, and encounters (rising to over 1,000 unique cards if you use the three expansions), no two games will play the same. You don't even need friends - grab two or more investigators and play solo if you want. If you want an atmospheric, challenging, epic game, get Eldritch Horror. Throw on some spooky tunes (I recommend something by Tom Waits or Nick Cave), close the blinds, light some candles, and get ready to have an unforgettable experience. Then lose 5 sanity. Sorry.